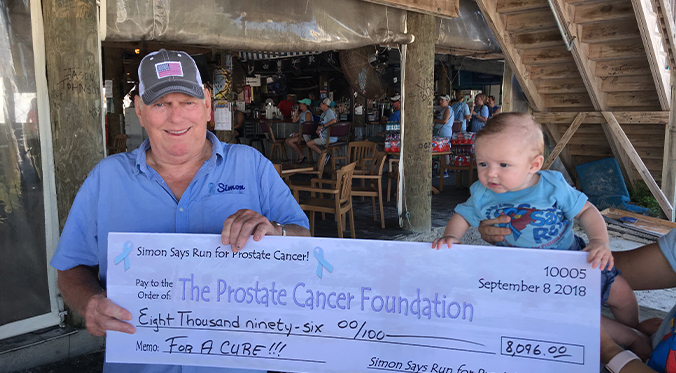 NW Florida fundraiser marks 6th year with its most donations ever

Six years ago, Jennifer (Gin) Newman’s father, Simon Mckee, was diagnosed with metastatic prostate cancer with a PSA of 5200. Within a month, that PSA number had jumped to 7400 and so he was taken to MD Anderson for treatment. The family didn’t know anything at the time about prostate cancer, how it was treated or what to do next.

But, Gin is not one to just sit around and do nothing. Together with her husband, she created the first “Simon Says Run” Run – a 5K race that is actually 5.8k (the .8 is for “prostate”) – with the goal of increasing awareness about prostate cancer and raising $3700 for the Prostate Cancer Foundation. That first year was a bigger success than they could have imagined; 80 people signed up to run!

Over the years, the Simon Says Run has only gotten bigger and better. Over 100 people participated in the race last year, whose theme was “Superheroes,” and it raised over $8100. In the race’s history, $33,000 has been donated to Prostate Cancer Foundation through this event.

The run takes place on Perdido Key, an island on the Florida/Alabama state line and the race course crosses from Florida to Alabama and back. In its sixth year, the race now involves many volunteers for the race course, registration, handing out fliers, and includes a raffle and individual giving for those that do not want to take part in the race itself.

As the race has grown, it has also attracted sponsors. Once again the Flora-Bama Ole River Grill will provide food, grills, beverages and staff. The run has also led to a separate  “Simon Says Ride”  event with the members of a local motorcycle enthusiast chapter which raised an additional $1400 last year.

When people ask Gin why she chose the Prostate Cancer Foundation as a beneficiary, she said that it all comes back to the researchers that PCF funds who created the medicine that was given to her dad, such as Zytiga.

If you want to learn more about the Simon Says Run Run, visit www.simonsaysrun.org. If you’re interested in creating your own fundraiser to raise funds for PCF and prostate cancer research, visit www.manyvscancer.org