This year the Prostate Cancer Foundation turned 25.  While we had hoped to be out of business, we are proud of what we have achieved in the fight against prostate cancer.  You can review our entire Impact Report here or download the 2-page Executive Summary as a pdf.

From the Executive Summary, here are the 25 top accomplishments:

1. Since PCF was founded in 1993, the death rate from prostate cancer has been cut in half. 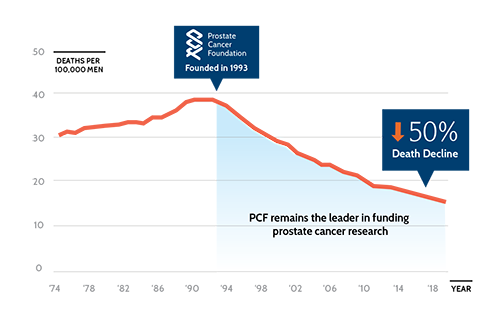 2. PCF has raised over $765 million for prostate cancer research to save and extend men’s lives.

3. PCF has contributed to a 20-fold increase in government funding for prostate cancer research over the past 25 years.

4. There have been approximately 1.4 million prostate cancer deaths averted since the founding of PCF in 1993.

5. PCF has funded almost every practice-changing development in prostate cancer in the last 25 years.

6. In the past few years, PCF has discovered that its goal to end prostate cancer will also address 100s of other forms of human cancers.PCF’s influence in treatment and funding currently overlaps with 67 other forms of cancer, including the top three forms of pediatric cancers.

7. As a foundation, PCF was among the first to fund research into exceptional responders — or patients who respond to treatment with incredible results — so that exceptional response may one day be common for all men and no longer exceptional at all.

8. PCF was one of the first scientific authorities to invest in research on lifestyle changes to improve health, including nutrition and exercise — areas of research we now know to be incredibly important for both prevention and disease recovery.

9. In 2017, PCF partnered with the Department of Veteran’s Affairs to help shepherd extraordinary care for the over 12,000 Veterans diagnosed with prostate cancer annually.

10. PCF funded the early stage research for 8 FDA-approved, life-extending prostate cancer drugs between 2000 and 2018, with many more currently under investigation.

11. PCF has sped up the development of lifesaving drugs. By eliminating the challenging administrative hurdles most other sources of funding require, encouraging collaboration among researchers, and requiring our researchers to share results, we have created an HOV lane for drug development.

13. PCF funded the cutting-edge biotechnology of circulating tumor cells (CTC), and in doing so, established CTCs as a way to investigate cancer progression, patient genomics, and to provide treatment selection and inform prognosis for patients.

14. PCF’s global funding engine has supported over 7,000 scientists involved in 2,000 projects at more than 210 cancer centers and universities in 22 countries around the globe.

15. PCF is the beneficiary of the longest running philanthropic pro sports league partnership in history with the MLB-PCF Home Run Challenge.

16. PCF is part of the largest single cohort study to research and rectify disease disparities in men of African descent.

17. PCF has been a consistent advocate for women in science and has supported young women at the early stages of their careers through the Young Investigator Award Program. 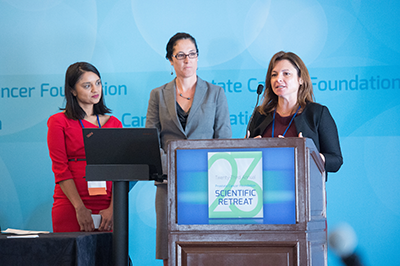 18. PCF was one of the original funders of CAR T-cell therapy in solid tumors, which catalyzed great scientific advancement and further funding for the technology.

19. PCF was also one of the first to fund immunotherapy, contributing to our reputation for funding what the government will not.

20. PCF has been a relentless advocate for men living a full life beyond prostate cancer, particularly in precision screening, active surveillance, alternatives to hormone therapy, alternatives to chemotherapy, and education.

21. 25 years of PCF research has extended the lives of men with advanced metastatic disease by an average of 18 months.

22. PCF has spearheaded a culture of collaboration in a field notorious for competition, requiring all of our researchers to share their data to help accelerate treatments.

23. PCF was an early adopter of using big data to solve the cancer problem, including funding a data sharing platform for scientists to share information about genetic abnormalities that might overlap all cancers.

24. PCF is not just interested in keeping men healthy and free of prostate cancer, but in keeping the whole family safe. That is why we actively fund research into the genetics of all types of cancer, to identify genes that will lead to not only prostate cancer cures, but cures for many other forms of cancer including breast, colon, ovarian and most major forms of pediatric cancer. To quote PCF’s President and CEO, Dr. Jonathan W. Simons, “You can’t cure prostate cancer without curing a whole bunch of kids along the way.” 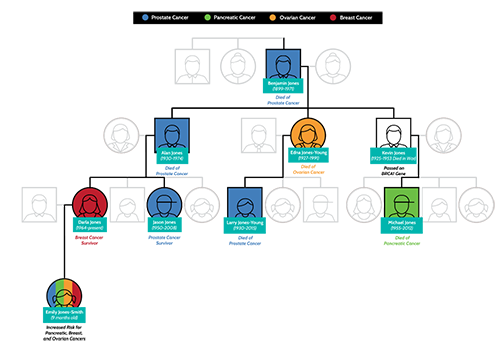 25. With enough funding, we project we can end 99.9% of all death from prostate cancer within 5 years.