“There’s More Hope All the Time.”

Metastatic prostate cancer can turn on a dime.  For too long, a sudden shift in the disease has meant bad news.  But now, more and more men are seeing a sudden turn in the right direction.  Jeff Finerman is one of them.

In a very short time, Jeff has gone from being nearly bedridden after weeks of debilitating bone pain to feeling great.  He feels so good, in fact, that he’s planning on joining his family on a long-awaited trip to Asia – a trip he thought he would probably have to miss.  “Two months ago, I wasn’t going to be part of that,” he says.  “My wife and I knew I probably wouldn’t be going.” 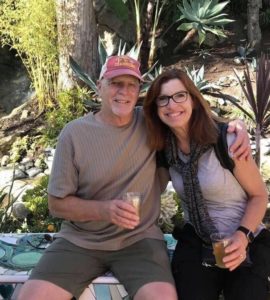 In September of 2017, Jeff was in such pain that “I was soaking in the bathtub two to three hours a day.”  He had just changed doctors – to UCLA medical oncologist and PCF Young Investigator John K. Lee, M.D., Ph.D.  “Dr. Lee was ready to write me a prescription for some heavy pain medicine; meanwhile, I was loading up with Advil.  Then, I started Zytiga (abiraterone) with prednisone (the two drugs are taken together); along with Xgeva, a drug that specifically targets and strengthens cancer-riddled areas in the bone; and Lupron, a form of androgen deprivation therapy (ADT) that helps control cancer by lowering testosterone.  “His quality of life was pretty bad,” agrees Lee, “and he was not able to do much physically.  He was writhing in pain.”

The Zytiga started to work quickly.  “Within two weeks, 100 percent of the pain was gone,” says Jeff.  “Here we are, two months later; I haven’t so much as taken an aspirin in six weeks.  I had my PSA checked last week:  it had dropped to .02.” Jeff is, says Lee, “a different man.  It’s wonderful to see.”

How did Jeff get to this point?  His journey with prostate cancer began in 2013, when he was 62.  “I’d been feeling some discomfort in the area of the prostate.”  Unlike many men who are diagnosed with metastatic prostate cancer, Jeff had been getting PSA screening – not yearly, but every other year, along with a physical exam.  Let’s go ahead and check it in three months.’”  And here came the first of many sudden shifts in Jeff’s cancer: “It went from basically 4 to 23 in three months.”

Jeff’s doctor immediately referred him to an oncologist at UC Davis, who suspected Jeff’s jump in PSA might be a false positive – maybe caused by an infection.  “He said, ‘I’ll give you an , but I don’t really expect to find anything other than an enlarged prostate,’” Jeff recalls.  “He did his (rectal) exam and said, ‘I was wrong.’  He scheduled me for a biopsy the next day. ”

Three days later, at 9:30 at night, Jeff was picking up his high school-aged daughters from their music lesson, and his phone rang.  “I’ve got both my daughters in the car, and the doctor says, ‘Can you talk?’”  The doctor told Jeff that he had advanced prostate cancer.  “He did a biopsy in 12 spots, and all 12 spots came back positive.  The majority had Gleason 9 cancer, Gleason 4 + 5, a couple 8s, and a couple 7s.  He said it was very aggressive.”  Bone scans and CT imaging quickly showed tumors on the L4 vertebra in his lower spine.

The news was devastating.  “It was a big, emotional thing,” Jeff says.  He told the doctors he wanted to fight it, so he could be there for his wife and daughters.   He was ready to be as aggressive with his cancer as his cancer was being with him.

Jeff and his wife, Karen, did something that all men making decisions about prostate cancer treatment should consider:  they decided to get a second opinion, did some research, and got in touch with oncologist Charles Ryan, M.D., a PCF-funded investigator at UCSF.   “We saw him within a few days.  I had all our charts from UC Davis, my scans, CDs, everything.”  Although UCSF was participating in the same clinical trial, Ryan said, “’I wouldn’t recommend it in your case,” because Jeff’s cancer was too aggressive.  “Let’s get you started on Casodex (another anti-androgen drug), then Lupron injections, and then we’ll coordinate radiation.  We don’t really have time for a trial that’s still in the testing phases.’”  Jeff and Karen were able to get the radiation – external-beam therapy, 45 treatments to the prostate, pelvic area, lymph nodes, all the way up to Jeff’s lower spine – done at a hospital near their home in Sacramento.   “They said I was going to be an absolute mess,” says Jeff.  “But other than maybe urinating a little more often and having a little discomfort in BMs, I never felt the side effects.  I had a great radiation oncologist.”

Ryan referred Jeff to a colleague at UCSF, PCF Young Investigator Rahul Aggarwal, M.D., whom Jeff began seeing monthly.  The cancer had shrunk significantly with the radiation and ADT.  “I was feeling good, and my PSA was down to .01, .02.  Dr. Aggarwal said, ‘Let’s put you on a temporary Lupron vacation, take you off it for a couple injections and see what happens.  I was off Lupron probably nine months.”  Then his PSA started creeping up, so Jeff went back on the Lupron.  In December of 2015, shortly after the family had moved to Southern California, Jeff started experiencing discomfort in his right hip, and CT scans showed a new area of metastasis.  “It was really starting to bother me,” he says.  He got more radiation – again coordinated with a hospital closer to home – and once again started to feel much better.

“The rest of 2016 was fine.  My PSA was still very stable, staying under 2.03.”  In April 2017, back at UCSF, Jeff underwent a PSMA-PET scan.  “Other than the L4 and the right hip, everything looked clear.  My organs looked good.”   A few weeks later, however, came another sudden shift.  “Around May, my hip started hurting.  My left knee started hurting, my lower back started hurting.”  A CT scan looked clear, but a bone scan showed “at least a dozen tumors all over.  The tumor on my right hip that had been irradiated six months earlier was now twice the size.  It had gone down my right femur, left knee, other vertebrae, my ribs, my clavicle.  How could this be, when I did this real high-tech PSMA-PET scan and it showed nothing? It was clear as could be.”

Because of the difficulty in making repeated trips all the way up to San Francisco, Aggarwal referred Jeff to the oncology team at UCLA, and got him an appointment with Lee.  Although both Lee and Aggarwal had wanted Jeff to start on Xtandi (enzalutamide), it is a very expensive drug, and Jeff’s insurance would not approve it.   Jeff’s PSA was up to 12.8.  “Every two weeks, it was going up two to three points,” and his pain was getting worse.  Jeff went from walking three to four miles a day and lifting weights to soaking in the bathtub.

Lee started the Zytiga and prednisone, along with monthly injections of Xgeva, and Jeff began feeling better very quickly.  “Over the last four years, I have been able to tell when my PSA is rising.  I know what’s going on.  When my PSA went from almost negligible to 12.8, I could feel it; that’s when all the pain was happening.  Every time I’m going to get my PSA checked, I already know if it’s up or down.  And now I just feel great.  My wife just had a sales meeting in Atlanta.  We rented a car, drove six hours, and spent the weekend in New Orleans.  I wear an Apple watch, and I could see that in seven days, I walked 45 miles!  Had I done that a year ago, even when I was feeling good, I would have been a mess.  One day I walked nine and a half miles!” 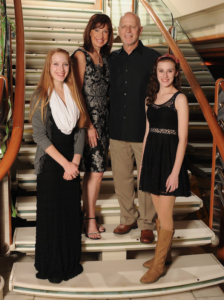 His PSA is almost undetectable.  “I saw Dr. Lee last Friday for my Lupron injection.  He always has a couple students with him.  He had a big smile on his face.  He felt great, I felt great.  He said that they’ve just started using PSMA-targeted radionuclide treatment, one of the few centers in this new study.  He said, ‘You’re a perfect candidate.  But let’s not rock the boat.  There’s a tiny percent of men who are exceptional responders to Zytiga.’”  With the PSMA-targeted radionuclide treatment on deck as a backup plan in case the Zytiga stops working, “I feel very positive.  It’s unbelievable.  I’m thrilled with Dr. Lee.  I was thrilled with Dr. Aggarwal for the four years he saw me.  I’ve always had very strong support from my family.  My wife and daughters are very strong advocates for me; they’re making sure I’m not going anywhere.  I’m going to see my grandchildren one day.   I felt so positive going through the 45 radiation treatments and not having side effects.”

Jeff’s ability to focus on the good things, and his positive outlook, are essential, says Lee, who points out that there is more reason to be positive about metastatic prostate cancer than ever before.

“I’d like to clone Jeff’s attitude and put it in an IV bag,” says medical oncologist Jonathan Simons, M.D., CEO of the PCF.  “His case is a perfect example of how this disease can take off – but it can also be put back into remission.  I tell my patients you can have a second, third, fourth, fifth, even sixth remission, because all of the research the PCF has funded has resulted in justifiable hope for men with advanced prostate cancer.”

Also remarkable, notes Lee, is that compared to just a few years ago, “there are more options today for men with metastatic prostate cancer who have a rising PSA.  Jeff is convinced that if this doesn’t work, he’ll have a plan B,” which could include if he progresses on the Zytiga, in addition to the PSMA-targeted radionuclide trial.  “There are new treatments in the pipeline that are going to extend survival and make a significant impact on quality of life.  We tell our patients this, but to have them see it firsthand, to feel that response, to know that it’s real – that’s pretty powerful.  There is absolutely still hope for men with metastatic prostate cancer.  There’s more all the time.”