April 01, 2012 — The Prostate Cancer Foundation (PCF), Stand Up To Cancer (SU2C) and the American Association for Cancer Research (AACR), SU2C’s scientific partner, announced today the formation of a new Dream Team dedicated to prostate cancer research during a press conference at the AACR Annual Meeting 2012, held in Chicago, Illinois. 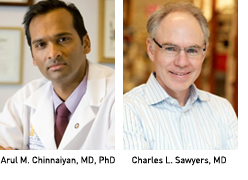 The SU2C-PCF Dream Team Translational Cancer Research Grant will provide funding of $10 million over a three-year period for a five-center project that will address resistance pathways for hormone  refractory prostate cancer with special emphasis on metastatic disease, and deliver near-term patient benefit through investigation by a multidisciplinary, multi-institutional, synergistic Dream Team of expert investigators.

Prostate cancer is the second most common cause of death for men in the United States, affecting one in six men, according to the Prostate Cancer Foundation. More than 2 million American men and their families are currently living with prostate cancer, with more than 16 million men affected worldwide.

“We are excited to announce and fund this Dream Team in partnership with Stand Up To Cancer. Healthy competition for the prestigious research award brought out tremendous innovation—well beyond what the National Cancer Institute or Department of Defense is currently funding,” commented Jonathan Simons, MD, President and CEO of the Prostate Cancer Foundation. “We are highly confident that the cross-institutional teams of researchers led by Dr. Arul Chinnaiyan at the University of Michigan and Dr. Charles Sawyers at New York’s Memorial Sloan-Kettering Cancer Center will significantly fast-forward actionable therapeutic sciences for men with metastatic, treatment-resistant prostate cancer.”

“Through this unique partnership with PCF, we will focus critically needed research on advanced prostate cancer,” said Sherry Lansing, one of SU2C’s co-founders. “Our collective goal is to produce personalized treatment approaches that will begin to benefit patients in the next few years.”

Chinnaiyan, MD, PhD, is a clinical pathologist and investigator at the Howard Hughes Medical Institute, S.P. Hicks endowed professor of pathology and professor of urology at the University of Michigan in Ann Arbor, and an American Cancer Society research professor. He also serves as the inaugural director of the Michigan Center for Translational Pathology. The Chinnaiyan laboratory has focused on functional genomic, proteomic, metabolomics and bioinformatics approaches to study cancer for the purposes of understanding tumor biology, as well as to discover clinical biomarkers. Dr. Chinnaiyan has also been the recipient of PCF career-development funding and research awards since 2001.

“Utilizing this grant, we will be able to bring great scientists and great clinicians from around the world to join forces in the fight against metastatic prostate cancer. We hope this unique model of research will lead to patient benefit in the short-term,” said Chinnaiyan.

Sawyers, MD, is chair of the Human Oncology and Pathogenesis Program at Memorial Sloan-Kettering Cancer Center in New York, N.Y. and a Howard Hughes Medical Institute investigator. Sawyers is also a winner of the esteemed 2009 Lasker-DeBakey Clinical Medical Research Award. Additionally, he is a professor in the Cell and Developmental Biology Program and the Department of Medicine at the Joan and Sanford Weill Graduate School of Medical Sciences of Cornell University, also in New York. Sawyers’ PCF-funded research in prostate cancer molecular pharmacology in 2009 defined up regulation of androgen receptor signaling as the primary mechanism of resistance to hormone therapy, resulting in the discovery of the anti-androgen MDV3100 that was recently shown to prolong survival in men with metastatic prostate cancer. Dr. Sawyers has been a recipient of PCF research award support since 1996.

“The unique research model facilitated by SU2C will allow unparalleled collaborations in the field of prostate cancer therapy research,” said Sawyers. “We hope that our project will move the world of precision medicine forward for the benefit of those who suffer with the disease and those who care for them.”

The Prostate Cancer Foundation and SU2C believe that this unique Dream Team model will advance scientific research in the interests of both today’s cancer patients and those who may develop cancer in the future.

Prostate cancer, like other types of cancer, is not a homogeneous disease. For example, up to 50 percent of hormone refractory prostate cancer patients have a genetic aberration of two genes fused together. Often, these fusions involve the ETS genes, a group of oncogenes that play an important role in the progression of prostate cancer. A majority also have a “deletion” or loss of an entire gene called PTEN. The diversity of genetic aberrations found in prostate cancer suggests that treatment decisions will require a personalized or precision approach — matching treatment to specific characteristics of a tumor. The premise for this proposal is that information about the genetic makeup of an individual’s prostate cancer may guide the doctor to choose a “personalized” treatment for that patient.

Chinnaiyan, Sawyers and the members of their Dream Team will focus on patients with metastatic prostate cancer. First, the team will implement a multi-institutional study that systematically evaluates patients enrolling in four clinical trials, evaluating novel drugs against the treatment of hormone refractory prostate cancer at five leading clinical centers.

They will identify predictors of why some patients respond to these therapies, as well as predictors of resistance to these therapies. The study will capture a molecular snapshot of a patient’s cancer and incorporate this information into the clinical trials. It will also enable a framework that will facilitate progress toward a personalized approach for evaluating new drugs and treating patients with prostate cancer.

The delivery of clinically valuable information based on the analyses of each patient’s tumor will improve the lives of patients with prostate cancer.  While state-of-the-art technology in DNA sequencing has dramatically accelerated biomedical research, translation into a clinical setting has numerous barriers that limit the potential benefits. This multi-disciplinary, multi-institutional effort establishes a framework for translating research into precision prostate cancer medicine for patient care.

The project is estimated to start mid-2012 with the first clinical trials scheduled to open in early 2013.

A SU2C-PCF Joint Scientific Advisory Committee (JSAC) conducted a unique, rapid and rigorous evaluation of the applications via a multi-step scientific review process.

The committee is chaired by Nobel Laureate Phillip A. Sharp, PhD, institute professor at the David H. Koch Institute for Integrative Cancer Research at the Massachusetts Institute of Technology in Cambridge, Mass. It is co-chaired by SU2C representative William G. Nelson, MD, PhD, the Marion I. Knott director and professor of oncology, and director of the Sidney Kimmel Comprehensive Cancer Center at Johns Hopkins University in Baltimore, Md., and PCF representative Howard R. Soule, PhD, executive vice president and chief science officer of the Prostate Cancer Foundation. The JSAC is comprised of highly accomplished senior laboratory researchers and physician-scientists, as well as advocates.

The review process began with a call for letters of intent by the AACR in October. The committee then chose four finalist teams, each of which met with the JSAC to present the plans for their research and respond to questions about their projects – a level of interaction between applicants and reviewers that is unique in a scientific review process.

The “Precision Therapy for Advanced Prostate Cancer” Dream Team consists of a multi-disciplinary group of experts that includes laboratory and clinical researchers, young investigators and senior scientists who have not worked together in the past, as well as patient advocates. In addition to Chinnaiyan and Sawyers, team members are:

Prior to today’s announcement, SU2C has awarded grants to six Dream Teams and 26 Innovative Research Grants have been awarded to young investigators. These recipients comprise 270 scientists from 67 unique institutions.

The Prostate Cancer Foundation (PCF) is the world’s leading philanthropic organization funding and accelerating research. Founded in 1993, PCF has generated more than $475 million and provided funding to over 1,600 research projects at nearly 200 institutions in 15 countries around the world. PCF advocates for greater awareness of prostate cancer and more efficient investment of governmental research funds supporting transformational cancer research. Our efforts have helped produce a 20-fold increase in government funding for prostate cancer. More information about PCF can be found at pcf.org.

About Stand Up To Cancer

Stand Up To Cancer (SU2C) – a program of the Entertainment Industry Foundation (EIF), a 501(c) (3) charitable organization – raises funds to accelerate the pace of groundbreaking translational research that can get new therapies to patients quickly and save lives. SU2C facilitates collaboration among the best and the brightest in the cancer research community. The American Association for Cancer Research (AACR) and a Scientific Advisory Committee conduct rigorous, competitive review processes through which SU2C’s grantees are selected. By galvanizing the entertainment industry, SU2C generates awareness and builds grassroots support for this new approach to ending cancer.

Stand Up To Cancer was founded by a group of media, entertainment and philanthropic leaders whose lives have been affected by cancer in significant ways. Members of SU2C’s Executive Leadership Council include Sherry Lansing, chairperson of the Entertainment Industry Foundation’s (EIF) Board of Directors and founder of the Sherry Lansing Foundation; EIF President and CEO Lisa Paulsen; Katie Couric; EIF Senior Vice President Kathleen Lobb; Rusty Robertson and Sue Schwartz of the Robertson Schwartz Agency; Pam Williams, partner at Laura Ziskin Productions; and nonprofit executive Ellen Ziffren. The late Laura Ziskin, a legendary film producer who executive produced the 2008 and 2010 SU2C telecasts, was also a co-founder of Stand Up To Cancer.

About the American Association for Cancer Research

Founded in 1907, the American Association for Cancer Research (AACR) is the world’s first and largest professional organization dedicated to advancing cancer research and its mission to prevent and cure cancer. AACR’s membership includes 34,000 laboratory, translational and clinical researchers; population scientists; other health care professionals; and cancer advocates residing in more than 90 countries. The AACR marshals the full spectrum of expertise of the cancer community to accelerate progress in the prevention, biology, diagnosis and treatment of cancer by annually convening more than 20 conferences and educational workshops, the largest of which is the AACR Annual Meeting with more than 18,000 attendees. In addition, the AACR publishes seven peer-reviewed scientific journals and a magazine for cancer survivors, patients and their caregivers. The AACR funds meritorious research directly as well as in cooperation with numerous cancer organizations. As the Scientific Partner of Stand Up To Cancer, the AACR provides expert peer review, grants administration and scientific oversight of individual and team science grants in cancer research that have the potential for patient benefit. The AACR actively communicates with legislators and policymakers about the value of cancer research and related biomedical science in saving lives from cancer.

For more information about the AACR, visit www.AACR.org.