To honor his grandfather, who passed away in January, an extraordinary 12-year-old boy took on the entire NFL to raise awareness for prostate cancer. 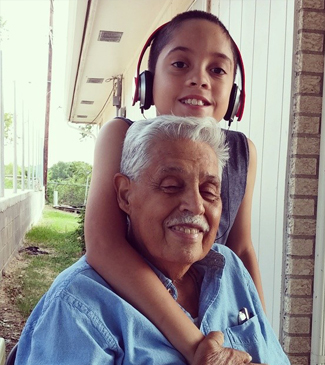 Champions come in all sizes, just ask Amanda Brown about her son, Ryan. In October 2014, while decorating a pumpkin with all the different cancer ribbons and learning about what each color represented, he paused when his mother explained that that the light blue ribbon was for prostate cancer. Even at the young age of 11, he knew too much about prostate cancer, it was the disease his grandfather had been battling for 14 years.

Ryan was extremely close to his grandfather, “Pepaw”, and the feeling was mutual. The two were best friends and spent as much time together as they could. Even though Ryan had never known a moment when he had not been sick, Pepaw rarely let his illness slow him down. That was until the summer of 2015, when he was given the devastating news that the cancer had spread and he was only given 6 months to live. 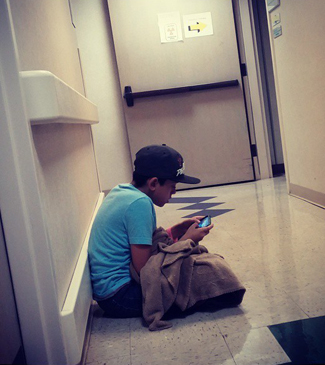 Ryan waiting for Pepaw outside the radiation area

While Ryan began to watch his grandfather weaken, he grew stronger. Whenever possible, he was by his side, from his radiation treatments to visits in the hospital. Near the end, he even missed a day of school to be there, a decision that no one regretted as it proved to be one of his last visits with him.

In the Spring and as the family was beginning to heal, Ryan decided he wanted to do something to honor his grandfather. Pepaw was a lifelong fan of all Texas football teams and Ryan remembered watching a game with NFL players proudly wearing pink in support of breast cancer awareness, where he had turned to his mother and asked “why doesn’t the NFL have a month for prostate cancer when all they players are men?” His mom’s response: “Well, I guess you will just have to ask the NFL!”

And that’s exactly what he did. In March, he composed his heartfelt letter that included his research about the disease, the impact the disease has had on him and his family and his wish that all NFL teams would support prostate cancer for the month of September as they did for breast cancer in October. He composed a letter to each General Manager of all 32 NFL teams and mailed one letter each day until all had been sent. For good measure, he also sent a letter to Commissioner Goodell.

It was a big project for a young boy but Ryan completed it and it made him proud to have done something for his grandfather and to share his story and bring awareness to others. 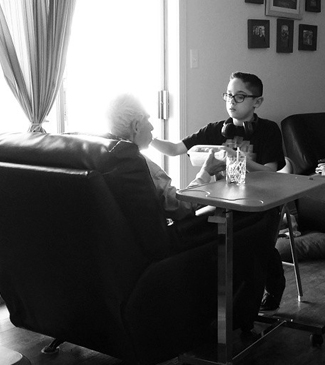 To his surprise, he began to receive responses to his letters. Seven teams sent personal letters while others sent team items to him. His mother put all of the responses into a frame for him so he could see how many people were touched by his story.

Ryan demonstrates how one person can make a difference. With commitment, passion and a willingness to take that first step, things can and will change. It’s a lesson we should all take to heart.