This is a love story about a man and his family.  Charlie Robison so fiercely loved his wife and daughters that he fought prostate cancer with all his might for 13 years.  His family loved him so fiercely in return that they were beside him every step of the way during his valiant battle.  And now that it has ended, they continue to honor him by working in his name to defeat this heartbreaking disease.

Never let it be said that women don’t own prostate cancer, that it’s just a man’s disease.  Charlie Robison was surrounded by women: his wife, Gail, his daughters, Gwen Poth and Erin Robison and his three granddaughters.  They were the reason he pushed himself so hard to keep going.  They rode bikes, traveled, skied, hiked, and laughed with him, made sure he ate healthy and got him into clinical trials.  Undoubtedly, without their steadfast encouragement, without that foundation of exercise, good diet, and emotional support, Charlie would not have lived so long – and for most of those years, would not have lived so well.

When Charlie was diagnosed in 2002, says Erin, “he took it like he took everything in his life: ‘Okay, what’s the next step, what do I need to do.’  He was so optimistic.  I never heard him complain.” 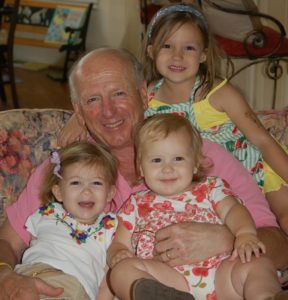 Charlie – age 59, running a multinational corporation, exercising, at the top of his game – decided to undergo a radical prostatectomy; this in itself was an indication of his commitment to going after this disease, Erin notes.  “It was a big deal for him to take time away from work,” and at the time, this meant a recovery period of several weeks.  But he did it, although his idea of resting at home most likely wasn’t the same as his doctor’s.  “I have vivid memories of laughing at him out in the front yard, saying, ‘Dad, what are you doing?’  He had his catheter, and he was out in the front yard, weeding.  I remember the color of the robe that he was wearing.  The doctors had said, ‘Don’t work.’  And there was the IT guy coming to bring his computer and the docking station.”

Characteristically, Charlie was “up and about, trying to contribute to the household” by working in the yard, notes Gwen.  “He was more concerned about being there for us, and what we were going through.”

Having a radical prostatectomy was a smart move: Charlie was young and otherwise healthy and his disease seemed to be confined to the prostate, although his Gleason score was high.  (Research more than a decade later shows that even with aggressive cancer that may already have escaped the prostate, removing the entire prostate deals cancer a huge hit and may extend life by many years.)

The 2019 Patient Guide is here

Enter your email address to get the free pdf

For two years, Charlie’s PSA was undetectable and the cancer appeared to be gone.  Then it started to creep back up.  “That was very devastating news,” says Erin, “but he still felt really well – and really, throughout much of the 13 years, he was asymptomatic.”  In 2007, Charlie and Erin hiked to the summit of Mount Rainier in Washington.   He and Gail, who would have been married for 50 years in August 2016, continued to travel around the world and to spend time in Copper Mountain, Colorado.  An avid skier in a ski-loving family, Charlie made sure his granddaughters got on skis soon after they learned to walk.

The family kept right on fighting his cancer with him, and he tried many different treatments, including external-beam radiation therapy and a clinical trial of chemotherapy, over the years.  Gail helped Charlie find medical oncologists Michael Glode, of University of Colorado Hospital, and Susan Slovin, M.D., Ph.D., at Memorial Sloan Kettering Cancer Center.  Slovin opted not to start him on hormonal therapy (androgen deprivation therapy, or ADT) right away – another smart move that kept his quality of life high.  There is no evidence that starting ADT (and dealing with its side effects) before there are symptoms of advanced disease prolongs life.

Charlie started ADT when the cancer started to make itself noticeable.  As the cancer progressed, “he physically started to change,” says Erin.  “He lost muscle mass, and he became very weak, sleeping in a little bit longer – and by that I mean maybe 10 minutes.  He still got up and made the bed, got dressed, and kept pushing.”

The radiation had side effects of its own, including some devastating colorectal symptoms, Erin adds.  “Memories keep coming to me as I’m talking.  Dad was a big cyclist.  He went on a tour of the Rockies with my mom, sometimes riding 100 miles a day, about 500 miles a week over mountain passes in Colorado.”  One day, “we were just doing a pretty short ride from Copper Mountain to the top of Vail Pass, and he just had to go.  I remember he was so humiliated, running to the side of the biking trail.  That was a moment, it was awful for him, it was embarrassing, and I realized, ‘My God, this man never talks about how this has affected him.  How often has this happened?’”

But as hard as he fought it, prostate cancer pushed back.  The PSA kept climbing, and scans showed more cancer in his body.  “He wanted to do everything.  He tried to do everything,” says Erin.  “Up until weeks before he passed, my mom and I were filling out forms for different pharmaceutical companies where they had found treatments for breast cancer that could potentially work.  It got to a point where he couldn’t take any more.”

It’s hard not to think about the what-ifs.  “It haunts us,” says Gwen.  Is there something they could have tried? Something else they could have done?  “I’m still in a lot of these private Facebook groups.  Some are for women who love men with prostate cancer; some are just for prostate cancer.  Just seeing the agony that people go through.  Some men almost seem to become paralyzed sometimes; they can’t live their lives.  Sometimes, what they’re going through is so bad, they take it out on their families.  I’ve seen so many messages from women – ‘I just can’t take this anymore, he’s treating me horribly.’  We never saw that from Dad.  I didn’t realize how exceptional that was.  He never said, ‘Why me?’ Even when he was very sick.  He continued to push and just live his life.”

Gwen and Erin credit both their parents with Charlie’s strength.  “Dad was naturally very athletic and very active, but my mom had a lot to do with keeping him active, too,” notes Gwen. “They could have sat on the couch all the time if he’d been married to another woman.”  Even toward the end, Erin adds.  “Mom would say, ‘Let’s go walk around the park.  Let’s walk around the tennis court.’”

The clinical trial was rough.  There weren’t many people in it to begin with, says Erin, but “everyone dropped out before my dad.  They called him the tough guy.  Dr. Slovin said to my mother and father that she firmly believed his attitude made a difference.  He had such an amazing attitude through the horrible mouth sores, the discomfort.  He just wanted to find a cure, to live longer and spend time with my mom, his daughters and granddaughters.”

“It’s been a really good ride.”  The moment no one wanted to think about finally came, says Erin.  “It was getting to a point where it wasn’t safe for him to be at home.  We had to make the decision of ending all treatment and the transfusions and doing hospice, or continuing the transfusions.  My mother got the blood work back and it was not good.  It was time.  Dad’s doctor in Charlotte, Earle Burgess III, and his nurse, Pamela Tiseo, had helped find a beautiful hospice.  They were waiting for us.”

Erin continues:  “The three of us stood around his bed.  We were all holding hands.  We said, ‘We have to.’  He looked up and said, ‘It’s been a really good ride.’

“We packed a bag for him and said that he could potentially come home, and we were trying to be as positive as possible, but he knew.  We were walking out of the house, and he just looked back.  He just stared, with a pride like, ‘I built this.’  It wasn’t so much sadness, it was almost like there was an internal smile, like, ‘I did good.  I did really good.’ It was so powerful.  That was such a painful moment but also an incredibly beautiful moment because of the way he took everything in stride.  He just faced it head on.  It’s time, and I’m okay with that because I did really good.  It’s a powerful reaction when you more or less are told it’s your time, to say it’s a good ride.  To embrace everything you’ve done in a few seconds and just walk out.”

Gwen knows well how blessed they all were.  “I think about the men who don’t have the support system, don’t have the financial resources to get to a clinical trial, and it kills me.  I think it’s very common, unfortunately.  Dad had a strong support system, but a lot of these men don’t, and they’re not getting good guidance from their doctors.  We are still shocked,” realizing what so many men are facing.

This is why Gwen and Erin are raising money to help fund the cure with Many vs. Cancer.  This is why Gail reaches out to women and families of men with prostate cancer.  “I’m so grateful to have this opportunity to honor him, and hopefully help some others,” says Gwen.  “We want to do what we can to make a difference.  We need to do more.”