June 24, 2015 — Tumor cells are continuously evolving to adapt to selective pressures introduced by changing host factors and the administration of new therapies. Following treatment with second-generation anti-androgen therapies abiraterone acetate (Zytiga®) and enzalutamide (Xtandi®), prostate tumors inevitably develop resistance and progress to lethal disease. Anti-androgen therapy-resistant prostate cancers can either manifest as a gradually progressive disease with bone and lymph node metastases and a rising PSA level, or more rarely, as a rapidly progressing disease with liver and brain metastases and a low or non-rising PSA level. This indicates that at least two evolutionary paths of resistance to anti-androgen therapy can occur. Developing optimal treatment for these unique tumor subsets requires an ability to definitively diagnose them and separately study their biological and clinical characteristics.

The subset of aggressive PSA-low/negative tumors have commonly lost their prostate adenocarcinoma phenotype and adopted characteristics of neuroendocrine cells (cells that integrate the nervous system with the endocrine system by making hormones in response to nerve signals). However, the expression of neuroendocrine genes and the pathologic morphology of these tumors is highly variable, making it a challenge for clinicians to diagnose. Importantly, clinicians believe effective treatment of these tumors requires a different set of therapies than adenocarcinomas. 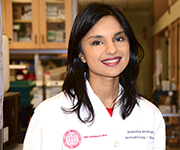 At the 2015 Annual Meeting of the American Society for Clinical Oncology (ASCO), PCF-funded Dr. Himisha Beltran of Weill Cornell Medical College presented results from a study that assessed whether molecular characteristics could help clinicians differentiate anti-androgen therapy-resistant prostate tumors of the rarer—and more aggressive—neuroendocrine phenotype from those with a typical adenocarcinoma phenotype.

Tumors from 81 metastatic anti-androgen therapy-resistant patients were biopsied and classified by pathologists as either being of the neuroendocrine or adenocarcinoma phenotypes. Tumors were then analyzed for molecular characteristics including genomic alterations, gene expression profiles, and epigenetic patterns.

Epigenetic signatures are non-mutational but heritable alterations, in which the structure of a genomic region is changed by the addition or subtraction of molecules that regulate whether or not genes in that region can be expressed. Epigenetic patterns are passed from parent to daughter cells when they divide, and provide the major mechanism by which organisms can have many cell types with completely unique functions despite all cells having the exact same genetic code. Dr. Beltran discovered that epigenetic patterns could almost entirely differentiate neuroendocrine from adenocarcinoma tumor subtypes. A number of molecular pathways were specifically altered in neuroendocrine tumors including neuron differentiation, adhesion between cells, and epithelial-mesenchymal transition, a reversible developmental mechanism that allows cells to lose characteristics of stationary cells and gain a migratory phenotype.

Using the key distinguishing information from these genomic assays (primarily the epigenetic patterns), Dr. Beltran created an 81-gene classifier which could classify neuroendocrine tumors with over 99% precision and recall. This molecular classifier was validated using datasets from four other prostate cancer cohorts.

This classifier will allow clinicians to diagnose tumors with the neuroendocrine phenotype and study clinical outcomes and therapeutic responses. Going forward, patients may no longer need to undergo invasive biopsies to obtain this information. Instead, tumor cells and tumor DNA required for these assays can be efficiently isolated from patient blood samples. Thus, a simple and minimally invasive “liquid biopsy,” or blood draw, can be obtained, which also facilitates monitoring of patients over time. This research will lead to new therapies and clinical strategies for treatment of this aggressive prostate cancer subtype.