The Prostate Cancer Foundation celebrates the life and legacy of our friend, golf icon Arnold Palmer, who passed away on September 25, 2016. A legend in the truest sense of the word, he possessed a unique charisma that transcended his performance on the fairway. There is no question that Mr. Palmer singlehandedly elevated golf to the most watched on television and the greatest spectator sport through the late 60’s, all of the 70’s and into the 80’s. Among members of the PCF family, he will be remembered as a humanitarian, philanthropist, and the epitome of a gentleman and a friend.
“You must play boldly to win,” Mr. Palmer once said. As an early spokesperson for prostate cancer in the 1990s, he adopted this credo to bring this disease into the conscience of the American public. He waged his personal battle with the disease with dignity and grace. His extraordinary efforts helped to increase awareness and no doubt saved many lives by encouraging men to get involved and get screened for prostate cancer. 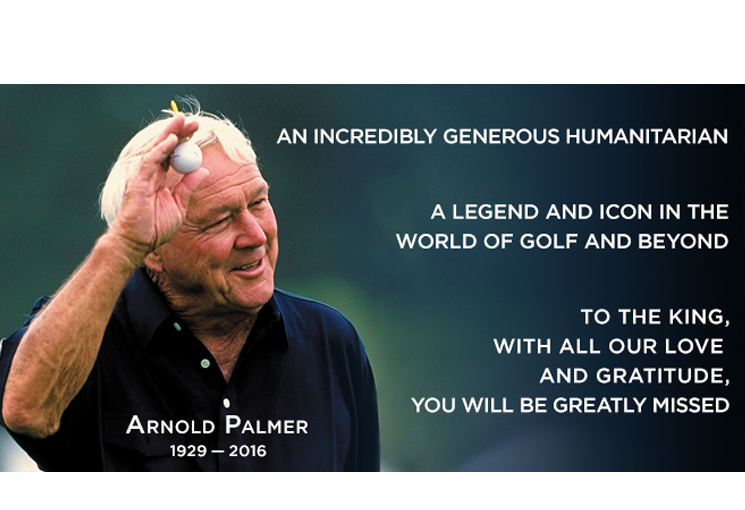 Ultimately, Mr. Palmer became one of the most influential ambassadors for prostate cancer awareness through the Arnie’s Army Battles Prostate Cancer program, which supported PCF for more than a decade. Mr. Palmer’s winning strategy on the green dovetailed seamlessly with PCF’s own to find a cure for prostate cancer in the field of medical research. PCF emulated his concentration, drive, and total commitment in golf by funding the best research ideas and find the best treatment options for patients.
The world is a better place because we had the pleasure of Mr. Palmer’s company for 87 years. We remember his life for all that he has done and the example he set, and express our sincerest thanks on behalf of the millions of men and their families fighting prostate cancer globally. We couldn’t be more proud of Mr. Palmer and his commitment to end not only prostate cancer, but all cancers. But more than anything else, we will miss our dear friend, and express our profound sadness at his passing.