LOS ANGELES, Calif. – March 7, 2019 — The Atlanta Hawks’ inaugural campaign to raise awareness to help defeat prostate cancer while raising funds to support life-saving research, resulted in $150,000 donated to the Prostate Cancer Foundation (PCF). In recognition of Black History Month and to bring greater awareness of this disease to the African-American community, the team kicked off the Black History Month Assist Challenge in February, pledging to donate $250 per assist from the Hawks Foundation to PCF. With 295 assists during the month, the 8th most in the NBA during February, the team raised $73,750 from the Hawks Foundation. Tony Ressler, Jami Gertz and the Ressler family matched the team and contributed another $76,250 to reach a total of $150,000.

“We are deeply grateful to the entire Atlanta Hawks organization for their all-star efforts to engage their audience through basketball to address the real problem we face in the in this country of too many African-American men dying from prostate cancer,” said Jonathan W. Simons, MD, PCF’s president and CEO. “Lives will not only be saved through education and awareness created about the disease, but also through the Hawks’ generous contribution to science which will be utilized for projects directly related to addressing the issue of disparity in African-American prostate cancer.”

The Hawks are the first team in the NBA to partner with PCF to raise awareness through basketball about the disease that affects more than four million men in the U.S. and 14 million worldwide. With one in six men of African descent in the U.S. diagnosed with prostate cancer in his lifetime, it is imperative that everyone understand the risks, especially African-American men who are 76 percent more likely to be diagnosed, more than twice as likely to die, and are much more likely to develop aggressive forms of the disease than other ethnicities.

As part of the month-long campaign, Hawks Vice Chair of the Board and Naismith Memorial Basketball Hall of Famer Grant Hill and his father, NFL Legend Calvin Hill, filmed a special public service announcement that was aired throughout the month on various Hawks channels (link).  Additionally, the public had access to educational resources via a custom website: Hawks.com/PCF. 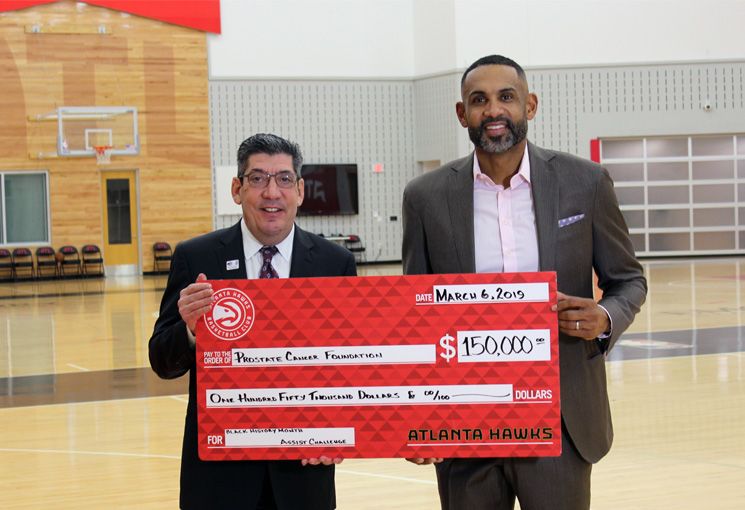 The Hawks Foundation. Tony Ressler, Jami Gertz and the Ressler family matched the team and contributed another $76,250 to reach a total of $150,000.

PCF is currently funding more research related to understanding and solving disparities in African-American prostate cancer than any other time in its 25-year history.  The Hawks’ significant donation will be added to the more than $10 million committed to research teams focused on understanding why African-American men are affected by prostate cancer disproportionately to other ethnicities and how to address this issue with treatments and cures.

Prostate cancer is the most common non-skin cancer among men in America and the fourth-most common tumor diagnosed worldwide. Despite its frequency, most men will not experience any symptoms. However, if the cancer is caught at its earliest stages, 99 percent of patients live five years or longer after diagnosis, which makes education so critically important.

ABOUT THE PROSTATE CANCER FOUNDATION

ABOUT THE ATLANTA HAWKS

With a bold identity and strong new ownership, the Atlanta Hawks Basketball Club and State Farm Arena remain committed to making Atlantans proud on the court and off. The 2014-15 Southeast Division Champions, the Hawks made the postseason in 10 consecutive seasons and reached the Eastern Conference Finals for the first time in franchise history in 2015. Off the court, the organization has built a culture of inclusion, diversity and innovation, all with a touch of Southern Hospitality. It continues into the community where the organization builds bridges through basketball, whether by constructing and refurbishing courts in Atlanta neighborhoods, providing scholarships to our basketball camps, or surprising and delighting our fans with unique Atlanta Hawks experiences. Atlanta Hawks Membership, which includes your seat for every home game for the 2018-19 regular season, is on sale now at www.hawks.com/membership or by calling 866-715-1500! For more information on the Hawks, log on to www.hawks.com today or follow us on twitter and Instagram @ATLHawks.