Public Service Announcement will focus on encouraging African-American men to get regularly checked for prostate cancer; the project is a collaborative philanthropic effort between (add)ventures, the Prostate Cancer Foundation and Team Holyfield 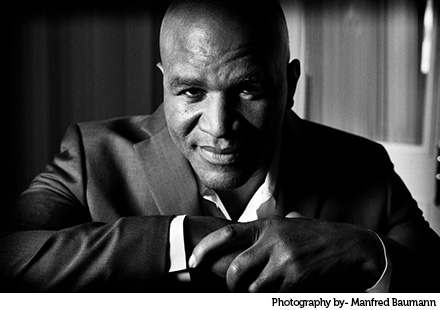 The public service announcement, which will be filmed on May 28 at a location to be announced, will feature Holyfield in his natural element—the boxing ring—as he tells his story of perseverance in the ring and in life. The piece will showcase that while strength, speed and stamina can be drawn upon to beat an opponent in the ring, other resources must be used when fighting an unseen force like prostate cancer – an opponent that could wind up causing a fight for life. The public service announcement will include a message from Holyfield that encourages African-American men to get checked for prostate cancer and directs them to www.pcf.org, the Prostate Cancer Foundation’s website.

“When prostate cancer is detected early enough, it is 100 percent treatable,” said Barbara J. Parsky, senior vice president and chief marketing officer of the Prostate Cancer Foundation. “Getting regularly checked for prostate cancer is a surefire way to detect it early enough to offer all men more treatment options with potentially fewer side effects than if prostate cancer remains undetected or found at a later stage. We can’t thank Evander enough for lending his voice, influence and passion to raise awareness about this disease and the benefit of early detection.”

Since hanging up his gloves in 2011, Holyfield has dedicated himself to doing service-based work that reflects his values and strong faith, which led him to establish Team Holyfield. Team Holyfield’s mission is to create and sustain relationships with individuals, companies and organizations that support altruism, community relations and humanitarian efforts and reflects Holyfield’s core values of “faith, family, foundation and future.” Holyfield is particularly interested in supporting initiatives that affect the African-American community. Prostate cancer is one such initiative.

“We want to tell people to spread the word and encourage their fathers, brothers, sons and friends to get checked for prostate cancer,” said Holyfield. “This is an issue that affects all men and is in line with our mission to partner with incredible organizations and invest in their important work. I’m honored to go the distance for the Prostate Cancer Foundation. Together, we can spread the word and hopefully knock out prostate cancer for good.”

Upon learning of Team Holyfield’s interest in the cause, (add)ventures President and CEO Steve Rosa conceptualized a national awareness campaign around prostate cancer with the donation of (add)ventures’ public service announcement effort as part of his firm’s corporate philanthropy program—(add)love.

“I grew up diagonally across the street from live boxing at Manny Almeida’s Ringside Tap in Fox Point so I know Providence’s rich boxing tradition well,” said Rosa. “I remember the stories of champions like Sugar Ray Robinson, Joe Louis and Rocky Marciano coming to my neighborhood so it makes me proud to bring another legendary champion to Providence — especially for such an important cause. Evander Holyfield is truly ‘The Real Deal’ in the ring and in life. Prostate cancer has attacked family and friends alike. I was happy to have our firm join Team Holyfield and the Prostate Cancer Foundation in this fight. Any fight is winnable with a champ like Evander in your corner.”

Team Holyfield’s mission and prime directive is focused on creating and sustaining relationships with individuals, companies and organizations that support altruism, community relations and humanitarian efforts. It was founded on the principles of faith, family, foundation and future. Team Holyfield’s unrelenting energy is directed towards one objective: to surface and evangelize faith, core family values and selfless contributions to those in need.

The Prostate Cancer Foundation (PCF) is the world’s leading philanthropic organization funding and accelerating prostate cancer research. Founded in 1993, PCF has raised more than $615 million and provided funding to more than 2,000 research programs at nearly 200 cancer centers and universities. The PCF global research enterprise now extends to 19 countries. PCF advocates for greater awareness of prostate cancer and more efficient investment of governmental research funds for transformational cancer research. Its efforts have helped produce a 20-fold increase in government funding for prostate cancer. More information about PCF can be found at www.pcf.org.