June 19, 2015 — Chemotherapy has traditionally been used to treat prostate cancer patients only after they have developed resistance to hormone therapy. However, two new studies presented at the 2015 American Society for Clinical Oncology (ASCO) Annual Meeting found that the addition of taxane chemotherapy extended survival in several groups of patients initiating hormone therapy: in patients with primary metastatic disease or relapse with metastases after definitive local treatment, and as a first-line therapy in previously untreated patients with localized high-risk prostate cancer. 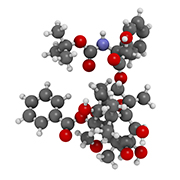 Prostate cancer patients who present with primary metastatic disease or relapse with metastases after definitive local treatment with prostatectomy or radiotherapy (RT) typically receive androgen deprivation therapy (ADT) with or without RT as the standard of care. Taxane chemotherapy or 2nd generation anti-androgen medications are only prescribed following the onset of ADT resistance. However, it is hypothesized that earlier administration of these therapies may extend patient lives.

Dr. Nicholas James of the University of Warwick and Queen Elizabeth Hospital Birmingham presented the first survival results released from theSTAMPEDE clinical trial, the largest randomized clinical trial ever conducted in prostate cancer patients. This study tested the outcome of adding various therapies to the standard of care—ADT with or without RT—in hormone-naïve patients either presenting with metastatic disease or relapsing after prostatectomy or RT. The addition of docetaxel + prednisolone to standard of care treatment extended the median failure-free survival time from 21 months to 37 months, and extended the median overall survival time from 67 months to 77 months.

These results support previous results from the CHAARTED trial, presented at the 2014 ASCO Annual meeting, where the addition of docetaxel to ADT improved median overall survival from 44 to 57.6 months in a cohort of hormone-sensitive metastatic prostate cancer patients.

Collectively, these results support a paradigm change in clinical practice. Docetaxel in combination with ADT should now be considered much earlier in the treatment regimen for men with hormone-naïve metastatic prostate cancer.

A patient diagnosed with localized high-risk prostate cancer will typically receive ADT + RT as his first line of treatment. Chemotherapy is a common neoadjuvant treatment option for many types of cancers, but its upfront use has not previously been shown to benefit prostate cancer patients.

These studies indicate that neoadjuvant chemotherapy in combination with ADT and IMRT may benefit patients with localized high-risk prostate cancer and should be considered as a first line therapy option. These findings are in opposition to results from the recently published GETUG-12 trial, which did not observe a benefit in relapse-free survival rates from the addition of docetaxel and estramustine to ADT as a first line treatment in high-risk localized prostate cancer patients. However, it is still too early to determine the effects on median overall survival times in either the RTOG 0512 or GETUG-12 trials. Because of the toxicity of docetaxel, which should be avoided or delayed if possible, median overall survival results from these studies are awaited before more definitive recommendations can be made for its use as an adjuvant therapy in non-metastatic disease patients.