BOSTON –– A new genomic study has identified prostate cancer mutations that may be more common in men of African-American background and which might be a step toward explaining why the disease is more prevalent and deadly in that minority group, says a report from Dana-Farber Cancer Institute.

The mutations, which are thought to disable a previously unrecognized tumor suppressor gene, were found in about 5 percent of prostate cancer specimens from 192 black men included in the study, whose results were published online today by Cancer Discovery. By comparison, these mutations occur in about 1 percent of prostate cancer specimens from predominantly white men of European descent analyzed by The Cancer Genome Atlas project, the authors said.  Mutations in a gene called ERF also appeared to be associated with more aggressive, castration-resistant cases of prostate cancer, according to the researchers. 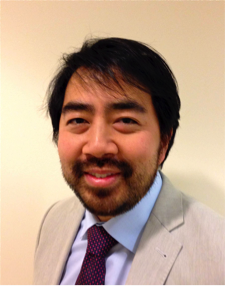 African-American men have a 1.4-fold higher risk of developing prostate cancer and a 2.4-fold greater mortality from the disease. The finding of a gene mutation that may occur more frequently in African-Americans “tells us that there are differences, and they are probably informative for how prostate cancer develops and how it behaves,” said Franklin Huang, MD, PhD, a medical oncologist at Dana-Farber. He is first author of the report with Juan Miguel Mosquera, MD, MSc, a pathologist at Weill Cornell Medicine in New York.

“It is at least a step in the right direction of beginning to understand the genomic basis of aggressive prostate cancer,” Huang added. “However, we wouldn’t expect a ‘smoking gun’ that would explain this large disparity in incidence and mortality between African-American and white men.” Huang explained that this is in part because relatively few mutations of any kind have been found in prostate cancer, compared to some other forms of cancer.

Although African-American men suffer disproportionately from prostate cancer, the authors said they “have been under-represented in most systematic studies of prostate cancer performed to date.”

When they sequenced the exomes – protein-coding DNA – of the cancer samples from African-American men and matched normal controls, the investigators identified several gene mutations that disabled the ERF gene. “ERF is recurrently mutated in primary prostate cancer in African-American men,” said the researchers. They also discovered that prostate tumors with a loss of ERF copies had more aggressive features when studied by pathologists.

In addition, the scientists carried out laboratory experiments revealing that mutated or missing ERF encouraged cancerous growth, while overexpression of ERF slowed cancerous growth. “These results were consistent with a possible tumor suppressor role for ERF in prostate cancer,” the authors concluded.

The results of the current study have a larger implication, the researchers said. Including more patients of African ancestry in cancer genomic studies – not just prostate cancer – “may enable the discovery of new cancer genes and inform the inclusion of diverse populations towards precision cancer medicine.”

The research was supported by the Prostate Cancer Foundation, NCI grant U01 CA162148, the Department of Defense Prostate Cancer Research Program Physician Research Training Award W81XWH-14-1-0514, and other grants.

From achieving the first remissions in childhood cancer with chemotherapy in 1948, to developing the very latest new therapies, Dana-Farber Cancer Institute is one of the world’s leading centers of cancer research and treatment. It is the only center ranked in the top 4 of U.S. News and World Report’s Best Hospitals for both adult and pediatric cancer care.