September 25, 2013 — A new urine test for prostate cancer that measures minute fragments of RNA is now commercially available to men nationwide through the University of Michigan MLabs. The new test—Mi-Prostate Score (MiPS)—improves the utility of the PSA blood test, increases physicians’ ability to pick out high-risk prostate tumors from low-risk tumors in patients, and may help tens of thousands of men avoid unnecessary biopsies.

The MiPS test incorporates blood PSA levels and two molecular RNA markers specific for prostate cancer in one final score that provides men and their doctors with a personalized prostate-cancer risk assessment.

•The prostate specific antigen (PSA) is a protein made by the prostate. For decades the PSA test has been used as a marker for the presence of prostate cancer in men—high or rising levels of PSA in blood may indicate the presence of a prostate tumor. However, the PSA test is a non-specific test for prostate cancer. That is, non-cancerous conditions such as an enlarged or inflamed prostate can cause elevations in PSA levels. And even when PSA levels rise above what has routinely been considered a trigger level (4.1 ng/ml in the blood) indicating the need for a needle biopsy to check prostate tissue for signs of cancer, less than half of those biopsies find cancerous cells. In addition, up to 44 percent of PSA-triggered biopsies find cancer cells that are non-lethal, indolent prostate cancer cells. Indolent prostate cancer is highly unlikely to shorten the lifespan of a man. However, treatment with surgery or radiation can carry significant risk of side effects such as incontinence or sexual dysfunction.

Improving upon the PSA test

An ultra-specific test for prostate cancer

•Dr. Scott Tomlins, MD, PhD, is an assistant professor of pathology and urology at the University of Michigan and a Safeway-Prostate Cancer Foundation Young Investigator. Tomlins co-discovered what is now commonly known as the TMPRSS2:ERG fusion. “The evidence shows that if TMPRSS2:ERG RNA is detectable at high levels in urine, a man likely has prostate cancer, whether or not his biopsy is positive for cancer,” said Tomlins. (Because biopsies typically sample less than 1 percent of the prostate gland, cancers can be missed, even high-grade cancers.) 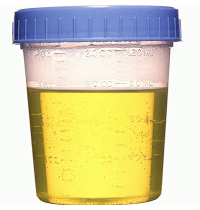 A commercial urine test (PROGENSA PCA3) for PCA3, developed and marketed by the California-based biotech company Gen-Probe, gained FDA approval in 2012 for use in men who are considering repeat biopsy after an initially negative result. While a welcome development, research shows that the new urine test offered by MLabs that measures both PCA3 and TMPRSS2:ERG should improve a doctor’s ability to stratify men suspected of having prostate cancer. In a study published in Science Translational Medicine, Tomlins and colleagues found the highest rates of cancer in men with the highest levels of TMPRSS2:ERG and PCA3 in their urine. The men in the study were stratified into three groups based upon the levels of TMPRSS2:ERG and PCA3 in their urine: low, intermediate and high levels, or scores. Cancer was diagnosed in each of the groups respectively: 21%, 43%, and 69%. High-grade prostate cancer, defined in the study as a Gleason score greater than 6, also occurred at different frequencies in the three groups with 7%, 20%, and 40% diagnosed in each group respectively.

Other research has shown that the two-marker urine test is more effective than the PSA test alone, or PSA testing that’s incorporated into a commonly used online tool (the Prostate Cancer Risk Calculator), at predicting the presence of prostate cancer.

For additional research results of the MiPS test, how results will be presented to men and their doctors, and other background information, click here.

From more information on how to send a specimen, please call MLabs at 800-862-7284 or visit www.mlabs.umich.edu.

The Prostate Cancer Foundation is not endorsing the use of this test or non-use—PCF does not endorse commercial companies or products. The Foundation heartily applauds each research step made toward precision medicine and better biomarkers for prostate cancer that improves the standard of care for patients and leads to less suffering and death from this disease that will affect one in six men in the US. The Safeway Foundation generously provided unrestricted funding to the Prostate Cancer Foundation for biomarker research that funded this work. The Safeway Foundation also provided PCF-Young Investigator funding to Dr. Tomlins. The Prostate Cancer Foundation is the world’s largest philanthropic source of support for accelerating the most promising research for better treatments and cures for prostate cancer. To learn more about PCF go to www.pcf.org.