At the 2016 Annual American Association for Cancer Research (AACR) Conference, Giorgia Zadra, PhD, of the Harvard: Dana-Farber Cancer Institute and Brigham and Women’s Hospital, presented results from a study that helped to clarify the relationship between obesity and prostate cancer. 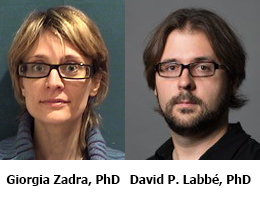 The skinny? Fat increases the activity of a critical cancer-driving gene called MYC.

Cancer is a greedy disease. Tumors plunder the body’s resources – vitamins and nutrients, energy and oxygen, and vital space as tumors grow to ultimately cause lethal damage. Worst of all, cancer steals precious time away from patients and their loved ones.

It follows then, that having a high-fat diet may be like pouring fuel on the fire, by providing cancer cells with even more of the resources they need. In fact, a number of recent population studies have linked obesity and a high-fat diet with an increased risk for advanced, lethal prostate cancer, especially among African-American men. Unfortunately, the exact biological reasons behind this phenomenon have remained elusive.

Investigating this important question required the intersection of four distinct fields of study: dietary metabolism, “epigenetics” (a mechanism of gene regulation), the biology of cancer-causing genes, and public health sciences.

To develop a comprehensive understanding of how obesity and a high-fat diet promote prostate cancer progression, Zadra, who studies cancer cell metabolism, teamed up with Prostate Cancer Foundation (PCF) Young Investigator David P. Labbé, PhD, of the Harvard: Dana-Farber Cancer Institute, who studies the regulation of gene expression in healthy and malignant cells by epigenetics.

Virtually every cell in the body has the exact same DNA, but not every gene is expressed at all times. Epigenetics is the process that programs cells to express some genes but not others. Epigenetics functions like traffic control by regulating the structure of DNA to allow or prevent access to genes for expression. This is why we have cells with very distinct and specialized functions, such as brain cells, skin cells, immune cells, etc. Without epigenetic programs, we might instead be a big mass of same-cell-type. Epigenetics is also critical in cancer, by reprogramming cancer cells to express genes that allow continual growth and survival, instead of sticking to the controlled-growth program of normal cells.

Previous PCF-funded studies have indicated that epigenetics is involved in the link between obesity and prostate cancer, but Zadra and Labbé wanted to delve even deeper into the mechanisms involved.

“Indeed there’s a link between epigenetics and metabolism, in the sense that metabolites are critical ingredients that are required for epigenetic reprogramming,” Labbé said. “Our hypothesis was that maybe diet, through alteration of metabolites, could modify the epigenetic program and reprogram the cell toward a more aggressive lethal disease.”

The team modeled the effects of a high-fat diet on prostate cancer in mice that have been genetically engineered to express an excess amount of the cancer-causing gene MYC, which causes them to develop prostate cancer. MYC is the most commonly amplified gene in primary prostate tumors and the second-most common amplification in metastatic prostate cancer (after the androgen receptor). MYC over-expression in the mouse prostate greatly mimics the biology of human prostate cancer.

When these mice were studied in more detail, a distinct set of metabolites was found in the prostates of MYC mice compared with normal mice. This new suite of metabolites was even more prominent in the obese MYC mice. These metabolic alterations were evident at the tumor precursor stage.

This indicated to Zadra and Labbé that not only does a fatty diet alter metabolism, but adding in the activity of cancer genes skews a cell’s metabolism even further.

“MYC is known to induce tumor progression by inducing a profound metabolic reprogramming. These results show that diet further pronounces this reprogramming, but only when the prostate already has cancer. It doesn’t affect much on normal prostates,” said Zadra.

Several of the altered metabolites caught the attention of Zadra and Labbé – these were specifically metabolites that are used for epigenetic reprogramming. They went on to show that the epigenetic program (the DNA structure regulating gene expression) was indeed altered in prostate cancer cells from MYC mice, and was skewed even further by a high-fat diet.

Furthermore, epigenetic reprogramming translated to differences in genes expressed by the prostate cancer cells. Specifically, genes involved in cell proliferation and epigenetic programming were turned on in MYC mice and were even more highly expressed in the obese MYC mice. Normal (non-MYC) mice fed a high-fat diet did not express these “MYC-regulated genes.”

Ultimately, the team discovered that the MYC oncogene actually rewires the cells’ metabolism, which in turn rewires their epigenetic program, leading to the expression of genes that fuel cancer growth. All of these MYC-effects are further magnified by a high fat intake, accelerating tumor growth and progression. In other words, fat acts as a MYC cancer-gene amplifier.

To determine if the findings in the mice translate to human patients, Zadra and Labbé teamed up with public health researchers from the T. H. Chan Harvard School of Public Health. They analyzed 319 tumors and 157 adjacent normal tissues from prostate cancer patients for whom information had been gathered on gene expression, clinical outcomes, diet, and lifestyle.

Commenting on the results of the patient study, Dr. Labbé said, “Unlike the MYC mice, which only have a MYC amplification as the prostate cancer driver, human tumors have many genetic alterations. This makes this more interesting in the sense that it may be generalizable. Diet might not only turn on the MYC gene program in MYC-driven cancers, but it might act globally when you have cancer.”

Altogether, these findings provide a much better understanding of how obesity and a fatty diet increase the risk for lethal prostate cancer. And, as Zadra and Labbé both emphasize, good reason for all prostate cancer patients to maintain a healthy weight through nutrition and exercise.

“If we can identify the mechanisms that explain what amplifies the MYC signature, we might have an even better indicator that can distinguish lethal versus indolent disease,” said Zadra. “We are working on this,” she added.

Zadra is an Instructor in Pathology and Labbé is a Postdoctoral Research Fellow in the labs of PCF-funded researchers Massimo Loda, MD, and Myles Brown, MD, respectively.

This study was funded in part by a PCF Challenge Award to Brown, and a PCF Young Investigator Award to Lorelei Mucci, ScD, of the T. H. Chan Harvard School of Public Health, who also participated in the study.

The 2016 AACR Annual Meeting was held from April 16-20 in New Orleans, Louisiana.